Event Director Mary Beth Shaughnessy reflects on the challenges and opportunities for women in security, and how ISC West & ISC East are committed to increasing female representation in the industry by giving women a platform to be seen and heard.

When she was a child, Jenny Radcliffe was fascinated by locked doors, high fences and the secrets that lay behind them. Today she is a self-described ‘burglar for hire’, a ‘People Hacker’ who is paid to break into high-security buildings, banks ‒ even the Tower of London ‒ to highlight their cyber and physical vulnerabilities, using a mixture of psychology, con-artistry, cunning and guile. 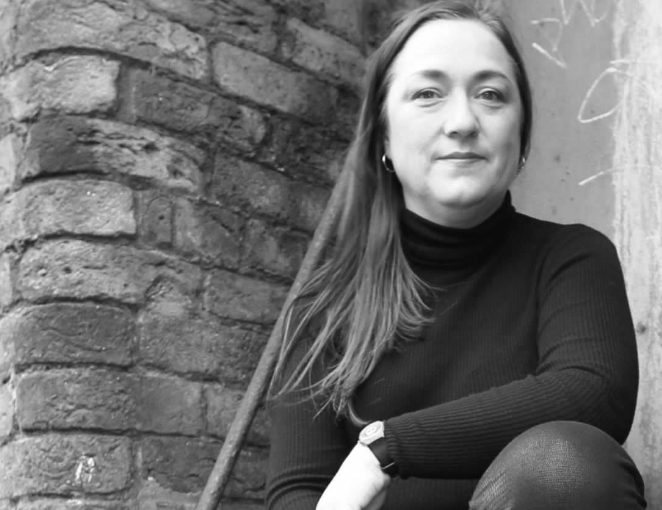 Jenny shared her experiences as a world-renowned social engineer and penetration tester in a keynote address at ISC West 2022, (22-25 March), the first major US security and public safety event for 2022. Her presentation was a high point of the Show, not only for the extraordinary insights she shared into cyber and physical security crime, but for her inspirational presence as a woman in what remains a male-dominated field.

Of the nearly 20,000 total security and public safety industry professionals attending, 11.3% voluntarily registered their gender as female. Security adversaries come from diverse backgrounds, which means that our defender community must be equally diverse in order to understand and succeed against them. So why do men significantly outnumber women in the industry?

There is certainly no shortage of jobs. The latest Security Industry Association (SIA) Megatrends 2022 report reveals that one of the biggest pain points for security industry leaders and companies of all types in the industry is the ability to find the talent they need. But for many young women coming up through school and college, the stereotype that STEM subjects (Science, Technology, Engineering and Mathematics) are better suited to men still persists, despite the fact that women consistently score as well or better in math and science-related tests.

Lack of representation reinforces the gender gap by dissuading women from entering the security industry. As Dr Nina Ansary puts it in ‘Anonymous is a Woman’, her compelling chronicle of global gender inequality, “it’s hard to be what we cannot see.” And while the numbers of women in security are increasing, some of those who do make it into the sector feel undervalued, unheard and discriminated against in terms of pay disparity.

A platform for change

As the leading comprehensive and converged security trade events in the US, ISC West (Las Vegas) and ISC East (New York) have a vision of a more diverse and inclusive security industry, in which women are recognized and valued equally for their contribution. 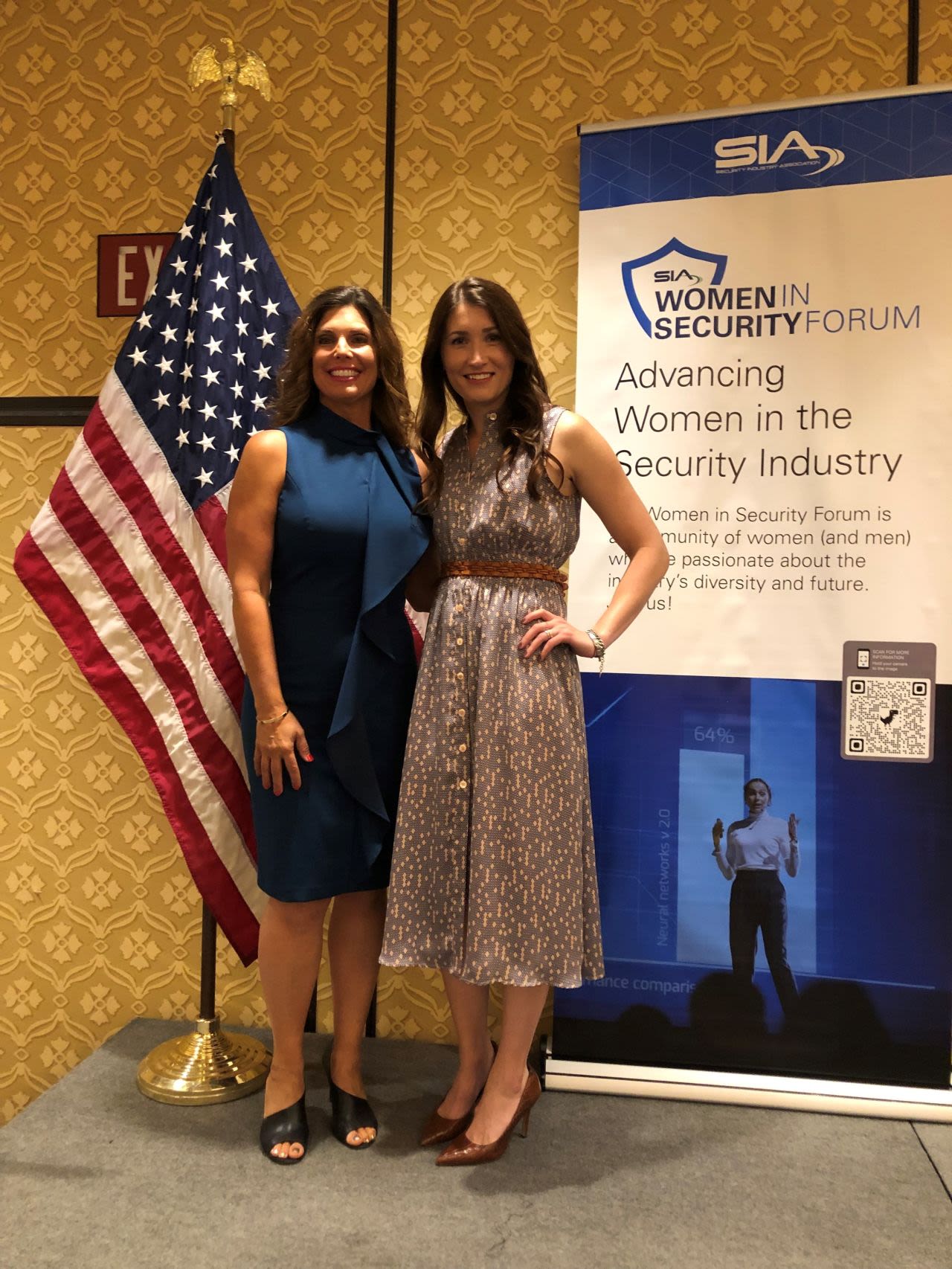 Working in close partnership with our premier sponsor, the Security Industry Association (SIA), we are committed to empowering more women in security, by supporting their professional development, expanding their networks, and giving them a vital platform to be heard and seen.

In 2018, SIA launched the Women in Security Forum (WISF) to engage, inform and connect both women and men who share the goal of expanding female representation in the security industry. The forum was a direct response to the concerns of SIA member companies that wanted to see a more diverse industry and were keen to proactively bring about change.  Today, the forum has over 1,000 individual members, with many more women taking the opportunity to attend WISF webinars and live events. 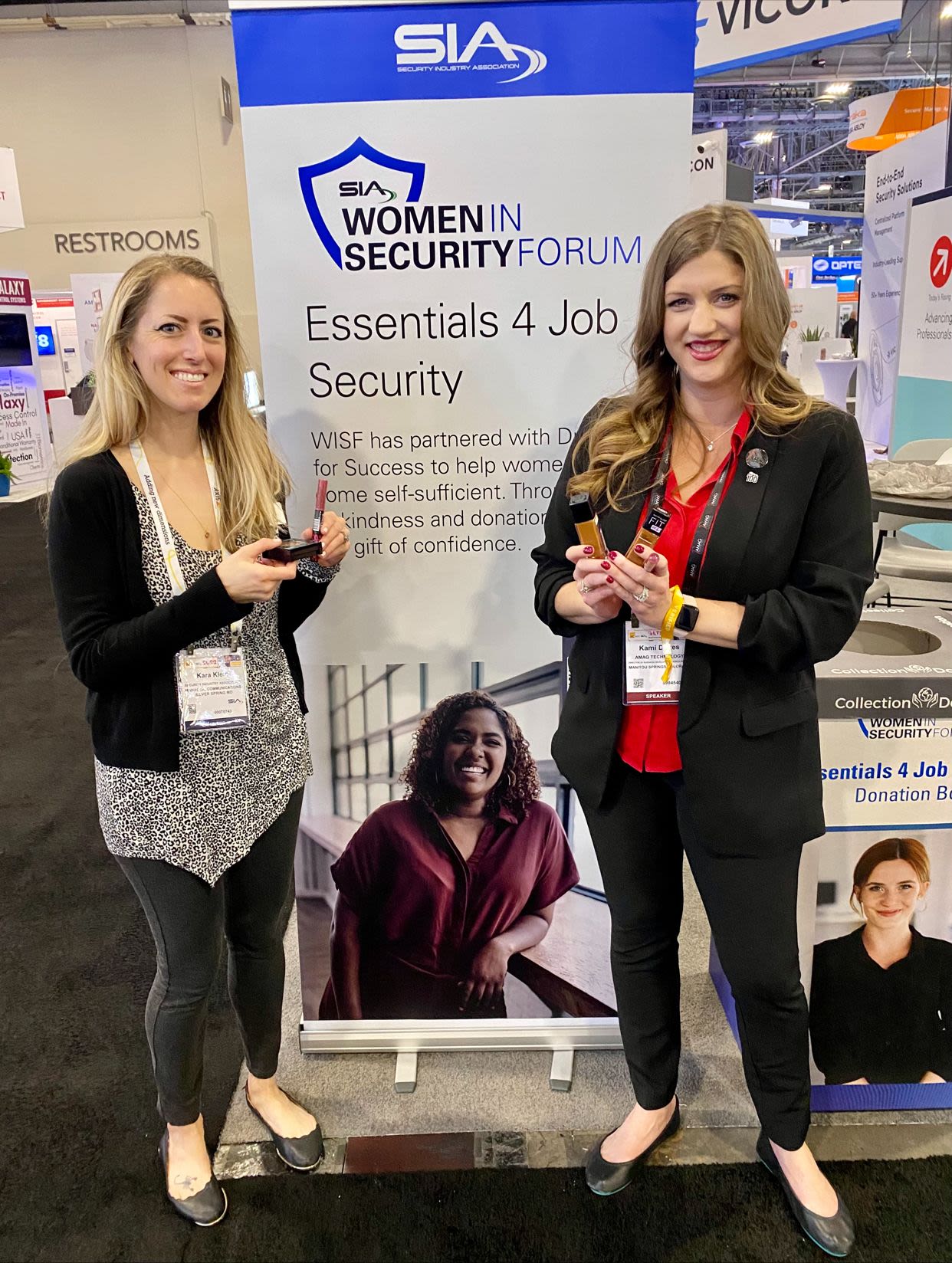 ISC Security Events sat on the inaugural steering committee of the WISF in 2018 and that same year, we were delighted to host the inaugural WISF Networking Breakfast at ISC East in New York. Some 70 people gathered for that first event to learn from and network with their female peers. The same networking breakfast at ISC West 2022 on March 25 drew an audience of over 200, with standing room only in the middle of the ISC West Show Floor. 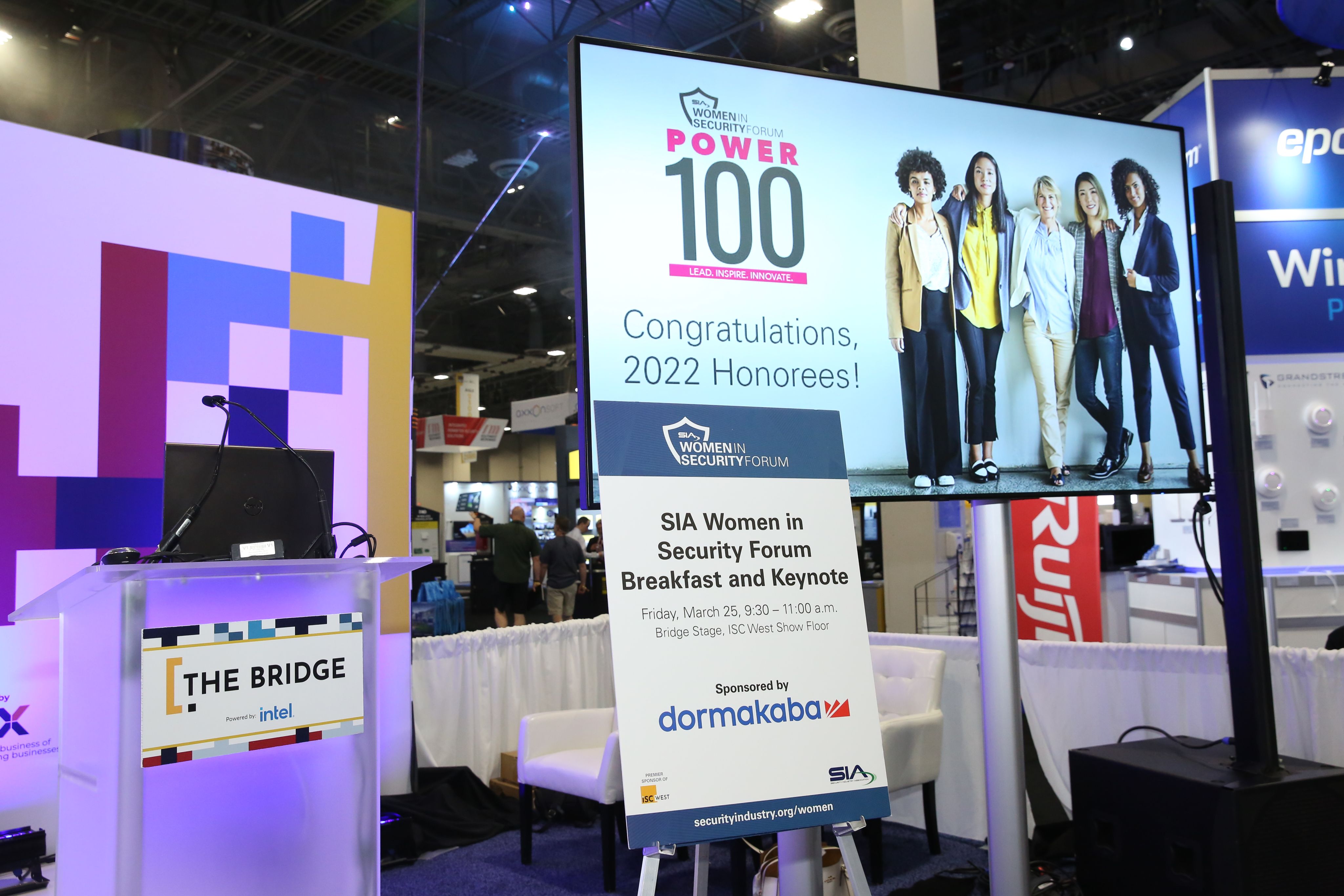 Raising the visibility of female role models is a potent way to inspire and empower women in security. Each November, ISC East in New York is also the setting for the presentation of the SIA Progress Award. First bestowed in 2018, the Progress Award celebrates individuals who pave the way to success for women in the sector. The 2021 Award was won by Elaine Palome – Director of Human Resources at Axis Communications. 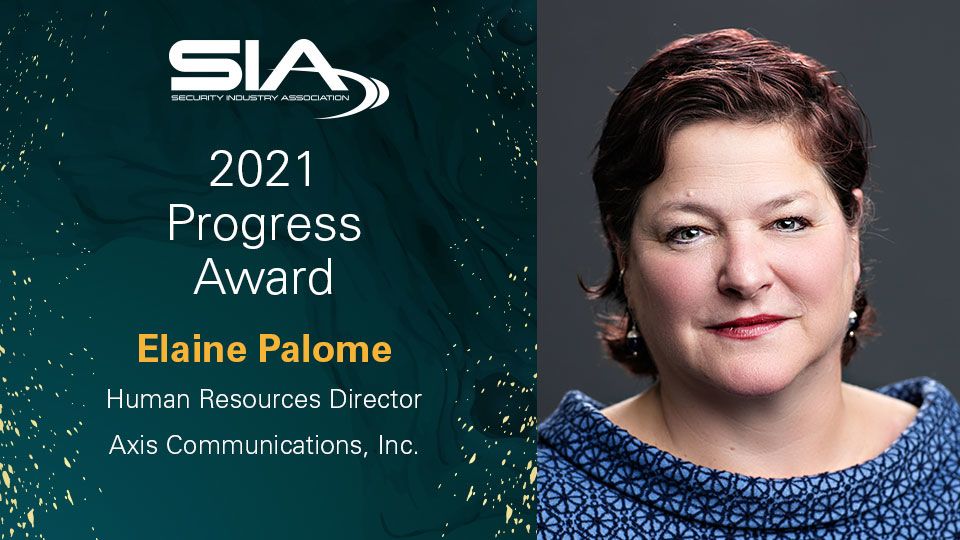 Reflecting on her award, Elaine spoke eloquently about the importance of diversity and what it means to her, saying: “Diversity is not a liberal ideal, a compliance issue or a fad. It is not a ‘check the box’ exercise. Diversity is everyone around you: your parents, children, co-workers, neighbors. We know that diversity and inclusion increases innovation, creativity and a corporation’s bottom line. But it really hit home for me five years ago when a colleague told me that it was just the right thing to do. That is when I realized that I could help make a difference.”

In a clear sign that Elaine is not alone, SIA took the opportunity of International Women’s Day 2022 (March 8) to announce its Power 100, a new annual program showcasing 100 women who are leaders, innovators, and influencers in the global security industry. ISC West 2022 was thrilled to recognise and celebrate the honorees at the Women in Security Forum breakfast on Day 3 of the show. 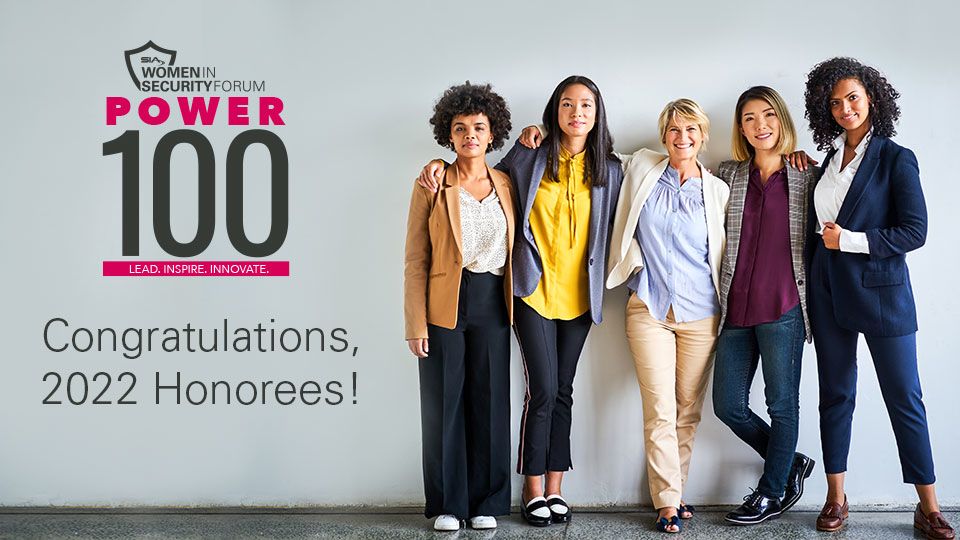 Keynote speaker roles are another way to draw attention to the achievements of women leaders in security and inspire younger generations to see themselves in these roles. With this in mind, the ISC Security Events team works closely with SIA to plan and deliver our conference programme each year. One male member of our WISF steering committee is taking his own stand on diversity by refusing to participate in any more ‘manels’ (men only panels).

Of the three keynotes at ISC West 2022 in March, two were by women. Jenny Radcliffe was preceded on Day 1 of the event by Rosemary Vassiliadis, Director of Aviation for Clark County Department of Aviation. Aviation is another industry in which women are underrepresented at senior levels and it was empowering to hear Rosemary share her insights and expertise on how Harry Reid International Airport is evolving to keep flyers moving safely and efficiently. 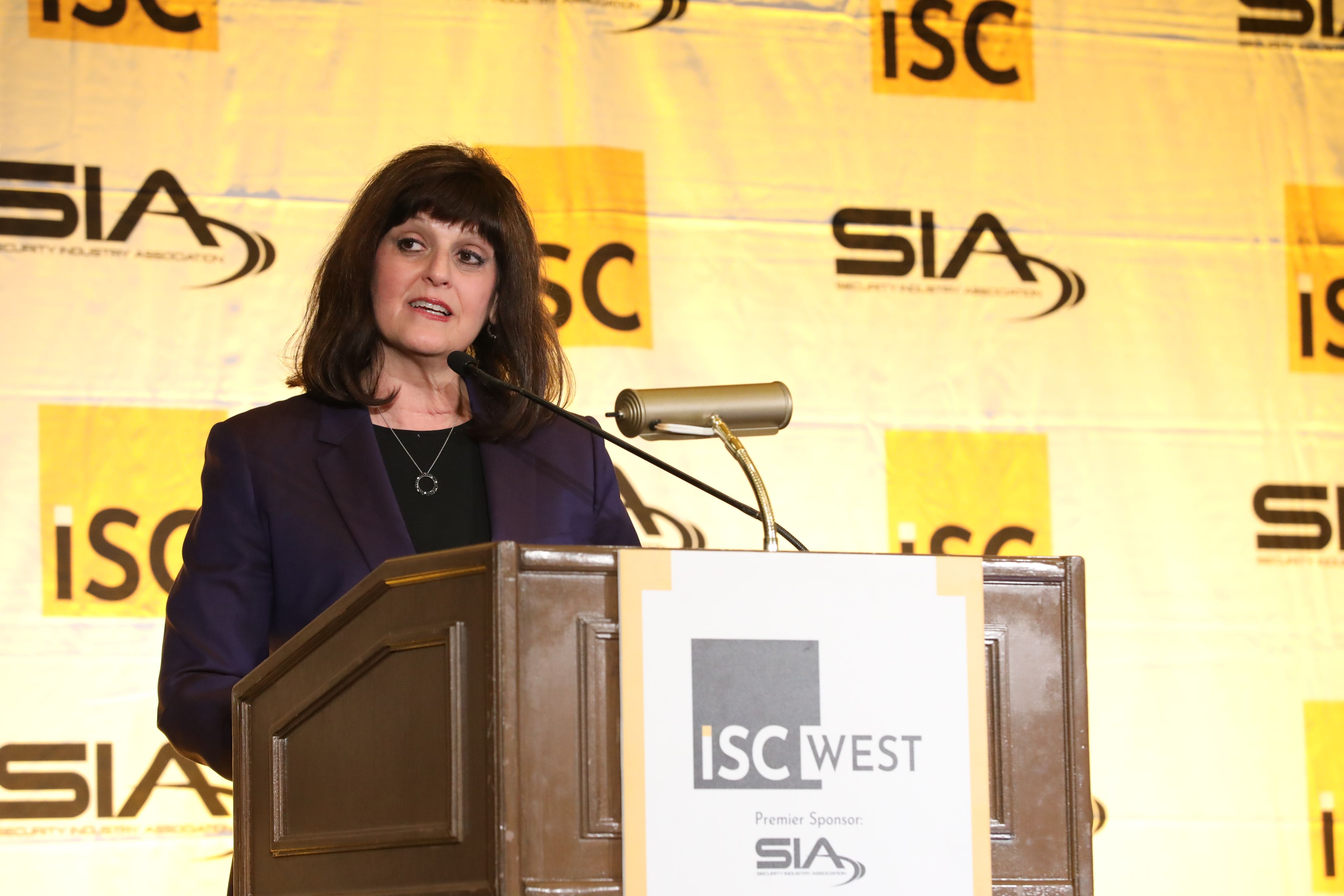 Diversity in security was also one of the content themes of The Bridge (Powered by Intel), which featured curated complimentary education sessions focused on industry megatrends. SIA’s Women in Security Forum held a special session live to kick off their new 2022 Leadership Series of events, which brings together professional development content and networking. During this session, renowned speaker and seasoned technology executive Gayle Keller and her colleague Susan K. Younger, revealed how to crack the communication codes that lead to greater amicability in decision making, especially between genders. 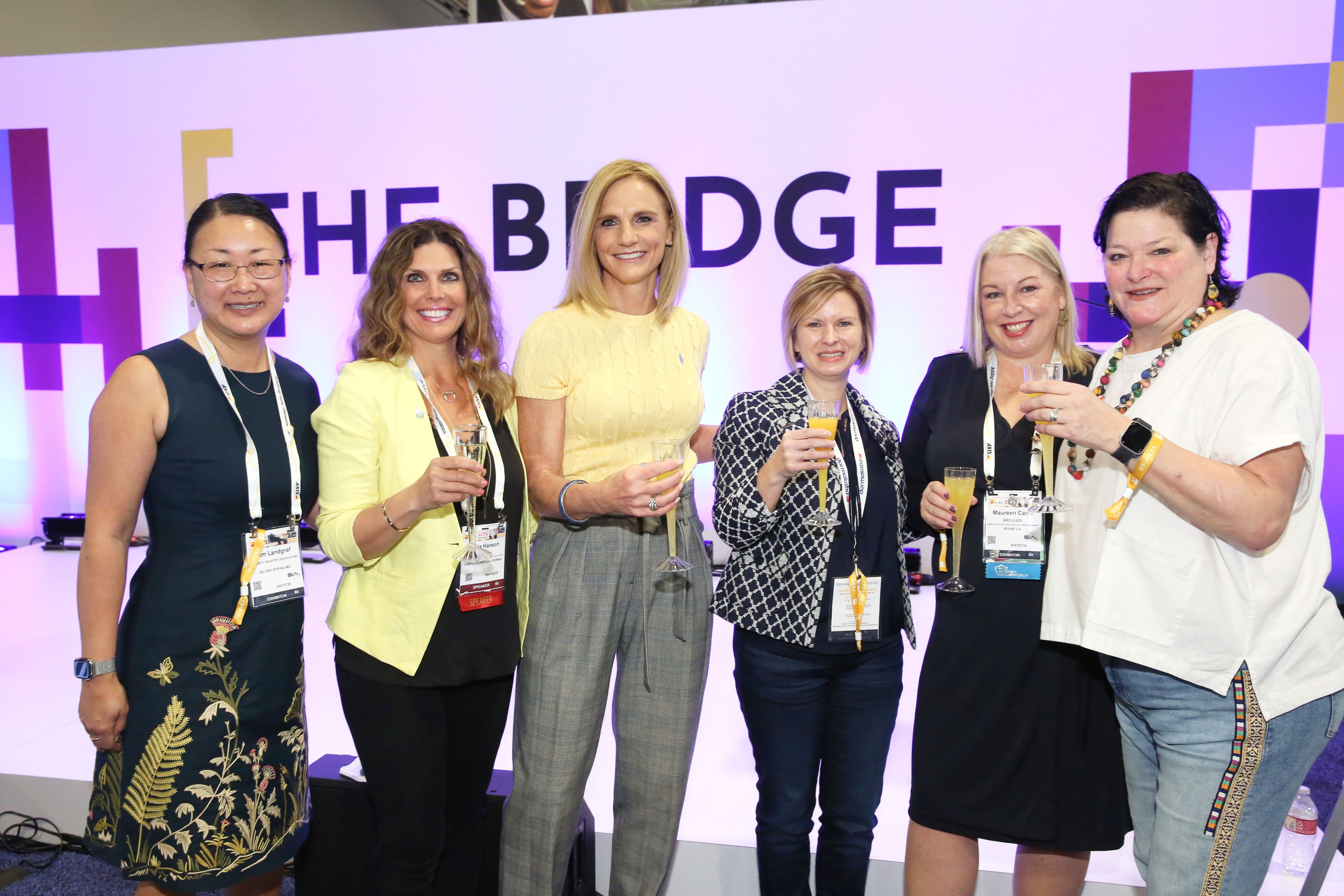 ISC West closed out with record-breaking attendance growth of 88% ahead of last July’s event. Leading ISC West & East is a privilege – not least because I am able to lead by example. Of our 18-strong core team, 14 are women including our Sales Director, Marketing Director, and Director of Industry Development.  When I started on the event 10 years ago it was common to walk into a room and be one of two women amongst 100 men. Today, women are making their presence increasingly felt on the ISC show stages and floors, and across our industry, but we still have much work to do.

With this in mind, and to address wider issues around inclusivity and equality in the security industry, we have adopted a new diversity statement to highlight that the ISC Security Events are places “where everyone belongs.” We welcome attendees, exhibitors, industry colleagues and professionals from a diverse variety of backgrounds, who make our events stronger and our collective experience richer. 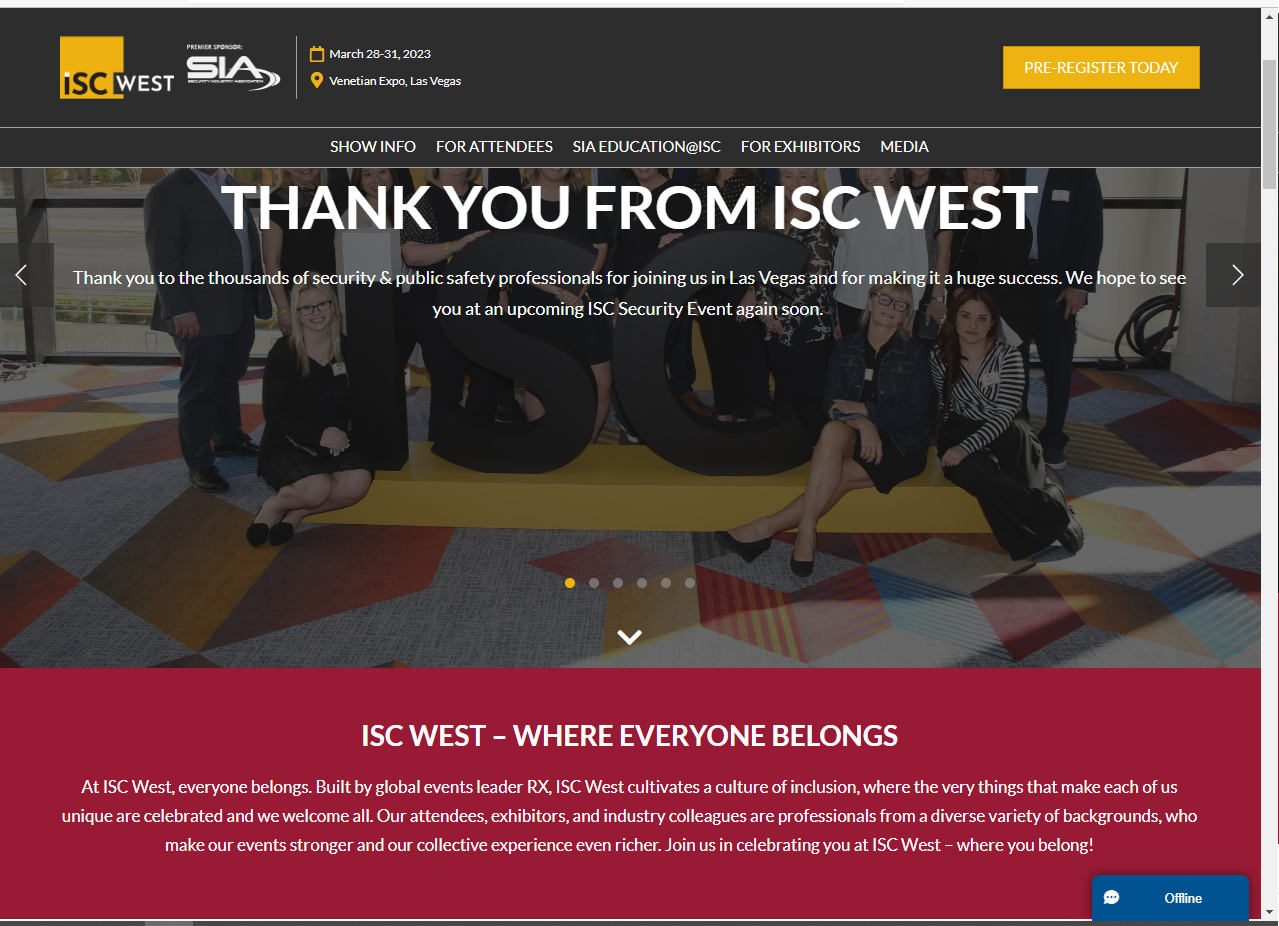 Built by RX, the International Security Conference & Exposition (ISC) security events are the leading exhibitions for the security tradeshow industry. Held in collaboration with premier sponsor SIA they are the only holistic security events strategically designed to provide products, technology, education and networking covering physical, IT and IoT security. ISC runs various regional events across North and South America, which range in a variety of different formats, each designed to connect you directly with suppliers and buyers in the security & public safety industry.