The Leeds-based Racial Justice Network (RJN) is one of nine organisations to benefit from RX Global’ 2020 $1 million donation to selected not-for-profit partners around the world who are committed to promoting racial equity. Penny Wangari-Jones tells us about their work. 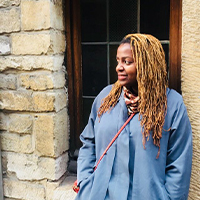 Q. Tell us about the background to the RJN. When and why was the charity founded?

A. The Racial Justice Network gained charity status in 2016 aiming to bring together organisations and individuals across West Yorkshire to proactively promote racial justice. We started off as a handful of committed activists working from home with no funding. Today we are a network of over 100 members of individuals, groups and organisations working together locally, nationally and internationally, to tackle racial injustice through community building, training, research, campaigning, mobilising and organising. As a group, we want to move people beyond thinking about racism as it is experienced at an individual level, to an understanding of it as a structural, systemic problem built on centuries of racial injustice and the legacies of colonialism.

Q. As you celebrate your fifth anniversary, what would you say are your proudest achievements?

A. That’s a difficult one! There are so many. Some are achievements which might seem very small to others, but which have had huge significance ‒ for example finding the right trustees who believed and trusted enough in the vision to get on board. Then there is the huge success of our 5 Ways to Disrupt Racism video which we put together in our first year. It has since garnered over 35 million views, been translated into over five languages and continues to be used as a training tool to this day.

I am particularly proud of Sisters United, a group of women who came to us with no experience of campaigning, but whose subsequent work highlighting the mismanagement of housing for people seeking asylum in Halifax resulted in the Halifax G4S Charter, and won them community involvement from the faith sector, Halifax council and other local groups. Our ongoing Stop the Scan campaign  highlighting the impact of surveillance technology and over policing of Black, Brown migrant and poor communities. It started as a conversation between a handful of us and the authorities but has since garnered national attention and support on the back of other race and social injustices including the hostile environment policy and calling for a firewall between police and the home office. Working with 10+ dedicated and committed organisers on this for the past three years has been great. More recently I have been encouraged by the interest in our Unlearning Racism Programme and work in driving race and climate justice which has brought us to the attention of organisations such as yours. It feels good to know that our work is being increasingly acknowledged and supported.

Q. The killing of George Floyd in the US last year sparked enormous interest in your ‘Unlearning Racism’ course. Can you tell us more about it?

A. It’s a unique programme developed by the RJN for a white audience who want to look inward and challenge their own and others racisms, and take anti-racist actions while building lasting relationships of trust and accountability with people of colour. People who have completed the course join the ‘Unlearning Racism Collective’, which provides ongoing support, advice and learning.

The programme has been running for three years but following the death of George Floyd over 1,000 people registered for the course within a week and were also approached by numerous organisations seeking group workshops for their employees. To meet the demand we developed shorter five hour taster webinars and delivered them to over 600 individuals – as many as our resources would allow. The interactive online workshops were facilitated by white trainers who have themselves completed the programme, are supported by the RJN and accountable to us.  For 2021, we are planning to roll out the 20 hour programme nationally, albeit on a small scale to start, and are appointing a new programme co-ordinator to oversee it. Some of the money donated by RX Global will be used to fund the new post.

Q. Covid-19 has had a disproportionate impact on BAME communities. What local support has RJN been able to offer?

When the first lockdown happened, we immediately took to our phones to conduct a listening exercise to find out how our immigrant communities were coping. We found that despite food drop-offs by local voluntary sector and council, many were in a dire situation, lacking English as a first language, little or no income, unable to afford internet data, without smart phones, TVs, computers or other means of seeking reliable information. Many are from war torn countries with no family support and lockdown isolation was triggering past traumas. There was also fear and anxiety of approaching authorities due to the hostile environment policy. We launched a ‘Covid Response’ campaign to highlight their needs and the public responded positively, donating over £3,000 in cash and over 1,000 toys, books, puzzles and garden items.  We were also able to buy tablets, phones, top ups and face masks to support over 700 individuals (including over 250 children) in Halifax, Bradford and Leeds.

Another important part of our effort was to bring immigrant community advocates linked directly to those marginalised communities together to share ideas and resources. They understand their communities’ needs better than anyone and we are working with them to lobby local and national authorities for better conditions. We have since been commissioned by Huddersfield University and Queen Mary University to do two pieces of research to tell their story. Too often, immigrant and BAME communities are portrayed as victims but we want to put on record how self-organised, resourceful and innovative their response to Covid-19 has been.

A. The 13th recommendation was conceived following the involvement of the Racial Justice Network in the 2019 Leeds Climate Change Citizen’s Jury, in which our input was omitted from the final 12 recommendations. It highlights the need for an international perspective on climate justice, which cannot be achieved without addressing the international impact of actions at a local level.

We see climate justice as a social justice issue. Everything is interconnected so that someone caring about the impact of climate change on our rainforests and wildlife should also care about the lives of people impacted by floods, famine and droughts, which result in forced migrations. We have a duty to support and give back to these communities who are disproportionately impacted by climate change as many of the resources we now enjoy have been achieved at their cost.

We are hoping to spread the 13th recommendation beyond Leeds and encourage those who are interested in climate repairs to embrace and embed this concept into their work.

Q. How will RX Global’ donation support your work in 2021?

A. As well as helping to fund a new Programme Co-ordinator for our Unlearning Racism Programme, it will also enable us to add vital staff hours, and to start documenting our work on video. 2020 was our busiest year yet and demand for our training and resources continues to increase. We want to thank RX Global for reaching out to us, rather than the other way round, for your great efforts in working to understand what we do, and for the opportunity for us to reach a wider audience.

Q. How can people support and/or get involved with the Racial Justice Network?

A. Campaign donations are always welcome, but we also encourage people to share our work and to take up anti-racism work wherever you are – it doesn’t have to be through RJN. Racial injustice has been going on for centuries. It does feel like more people are finally starting to talk about the root causes but there is so much work still to do.